The Word became flesh and dwelt among us 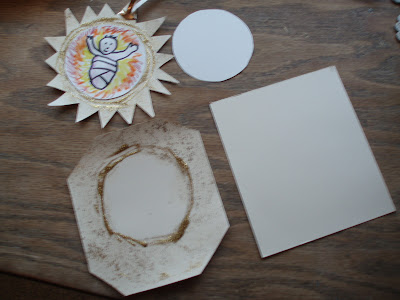 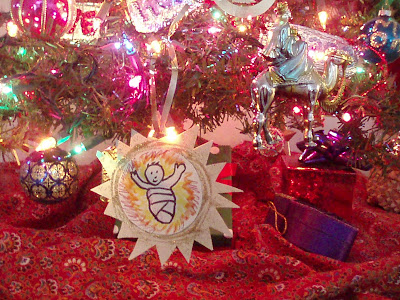 In the olden days, I was an art teacher for Kindergarten through 6th graders. I was pressed into service today when the craft with the lesson my husband was going to teach his 1st and 2nd grade Sunday school was too complex. The main idea was that Jesus is God and the light of the world.
It's important to me that the kids do the work themselves, but we had 10 minutes, so I chose carefully what I would leave up to them. What I made ready at home was : 2 and a half inch circles of card stock, 5 inch squares of card stock. With sparkle paint I painted around where the first circle would be and drew some messy sparkly lines. In class, we talked about what was so special about the baby Jesus and decided that it was that he was both a baby and the son of God. I quickly showed them the steps. I had them draw the baby Jesus on the circle. Any way they did it was fine. Some drew swaddling clothes (which do make him look rather like a caterpillar- but that metaphor works too!) Others added straw for him to lie on, a manger, etc. Some children started the drawing too small and used the other side for a second try. When they were done with the drawing we put a little glue on the back of the circle and had them position it. They then took a scissors cut triangles out to make it look like a star (as I had shown them in my demo). We punched a hole and tied a gold ribbon through it and we were done. If they had done all the cutting and all the gluing and the sparkle painting, it would have taken at least 30 minutes and made more mess, but as it was it took 10-15 and while some kids were finishing, others cleaned up and we were done. They'd drawn the baby and they had cut the points of the star. Not as creative as I would normally want, but they still had some input, it wasn't just assembly. I wish I had taken pictures of theirs, but it was pretty quick!

The verse we glued on the back was John 1:14a The Word became flesh and made his dwelling among us.
Posted by Virginia Wieringa at Sunday, December 14, 2008

All images and words appearing in this journal and my website are copyrighted with all rights reserved. ©2020