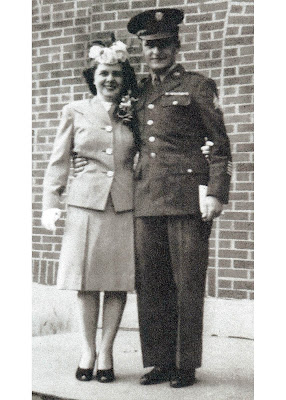 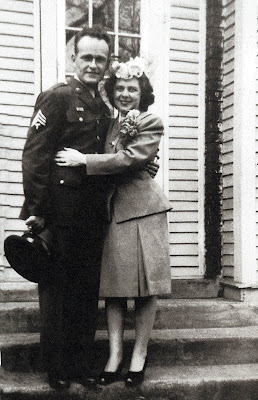 More cleaned up photos of my in-laws. November 4, 1944 was their wedding day- he was back on a short leave from New Guinea where he was stationed and saw action during WW2.
Posted by Virginia Wieringa at Wednesday, April 30, 2008 2 comments: 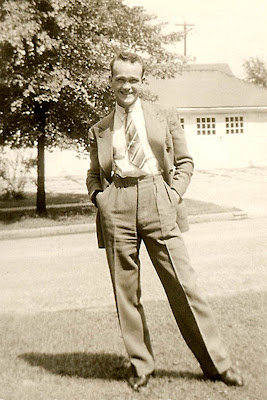 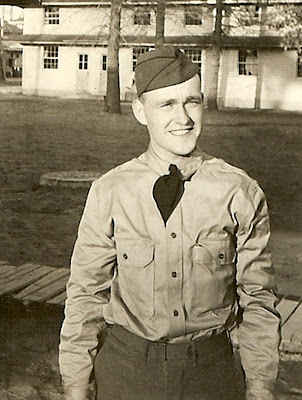 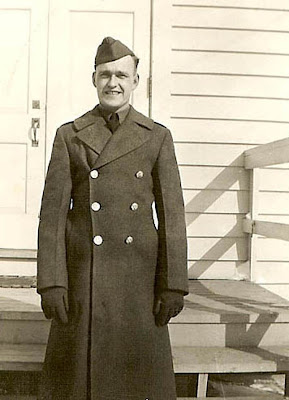 I just cleaned up a few photos on Photoshop of Fred's dad who died in March. Those old photos didn't age well, there was a lot of damage, but these look pretty good now.
Posted by Virginia Wieringa at Monday, April 28, 2008 No comments: 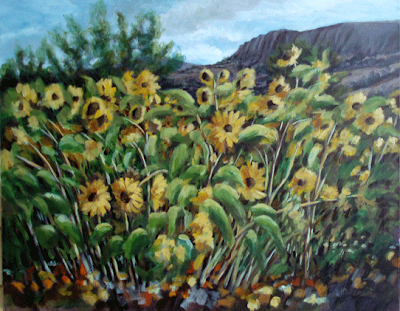 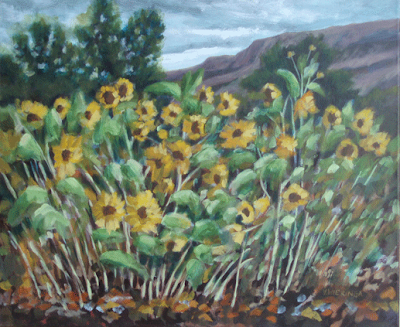 Though these post as the same size, the first picture
GOLDEN 2 is larger (30"x24")
GOLDEN 1 which I started first, is 24"x20". I've been painting sunflowers for at least a year and these are the ones that are the most satisfying to me. They are based on a gaggle of sunflowers I photographed in Golden, Colorado last year in the Clear Creek History Park.

Yes, they are the same, but different!
Posted by Virginia Wieringa at Monday, April 28, 2008 2 comments:

As yet not named 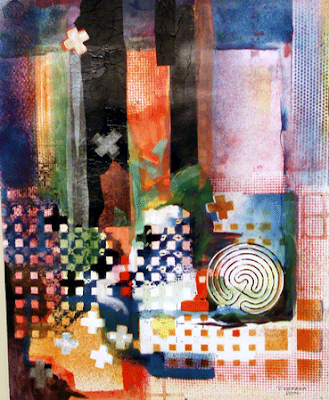 This is a painting related to the Meditating on the Light piece I posted recently. They actually are related compositions. This one hasn't revealed its name as yet! Back in 2006 I named them Perek Shirah which is the name of a Hebrew book of songs celebrating the natural world as God's creation. I still love that title and will use it again sometime.
Posted by Virginia Wieringa at Tuesday, April 22, 2008 No comments:

MEDITATING ON THE LIGHT 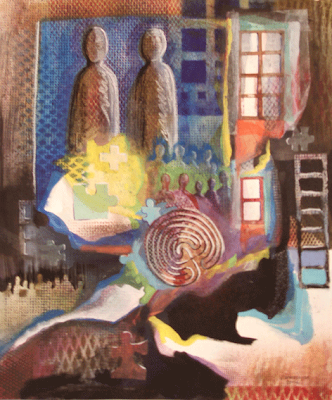 A new piece- actually an old piece from 2006 that just got a makeover. I always liked the start but I was mystified as to how to finish it. It's in a frame from the past, always nice to give new life to an old frame and glass. This piece will go to the Uptown Gallery in Grand Haven, where I'm going to be part of a watercolor show called Splash 10.

I had a wonderful time today with a group of kind people from Hope Reformed Church in GR who listened to my PowerPoint presentation Enigmas and Mysteries and asked very thoughtful questions.
Posted by Virginia Wieringa at Sunday, April 20, 2008 No comments: I will be entering this acrylic landscape in the 2008 Festival competition in Grand Rapids. This is based on some of the photos I posted a few days ago.
Posted by Virginia Wieringa at Friday, April 18, 2008 2 comments: 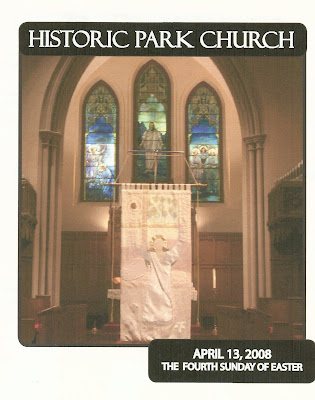 This is from the dedication of the Anastasis banner for Easter at Park Church in Grand Rapids. To see other posts about this banner, enter 'Anastasis' in the search area at the top of the blog.

When I was invited to design a new Easter banner for Park Church, I knew it had to be something that would complement the ‘poems in stone and glass’ that are the church building of Park. There is a rich history of art and faith that needed to be considered.

Through conversations with Bets Casey and Rev. Todd Perry and research into Easter imagery, I developed some sketches and a vision for this banner which I hope will visually sing the Easter Hallelujahs.

In the early Christian church, icons were considered sacred doorways into the divine. Icons titled ANASTASIS- literally ‘to stand again’ tell the resurrection story. I incorporated elements from ancient icons into the Park Church Easter banner.

This Easter banner I created includes the entire story of salvation, not just the reanimation of Christ but the complete package of the salvation story. The cross is there, but instead of a symbol of torture, humiliation and death, it has become a symbol of triumph. The critical element is the open, empty tomb and the stone rolled away . Through it Christ conquered death and so shall we! Also, here, as in the ancient icons of the story, there are witnesses. They could be disciples, or saints who have gone before or they could be a choir of angels. Whoever they are, they are a cloud of witnesses to the story.

The sun on the left rises and sheds light on the scene, but the light also emanates from Christ- the Light of the world- who is our source of light. The Greek letters in his halo say, “I AM WHO I AM.” There is a shine and glimmer in many of the fabrics which catch and reflect the light.

Christ is robed in white and gold. This speaks to his purity and holiness. His hands and feet bear the scars of the crucifixion. His face is aglow. His arms are lifted in proclamation and welcome. He stands firmly and also steps forward toward us. The backdrop of white and beige fields of flowers celebrates the cycle of life, the three lilies could be allusions to the Trinity. From early times, lilies were symbols of purity used in depictions of the annunciation. They suggest the plan of God from the beginning and the start of the salvation story in Jesus birth from the Virgin Mary. Also in groups of three on either side of the banner are striped pillars vertically suggesting strength and the Trinity and also echoing the architecture of the sanctuary of Park Church.

I am honored to have been chosen to create this banner and making it has enriched my faith journey and my art skills. I hope that it will add a visual hallelujah to the Easter worship and bless the celebrants of this great salvation.
Posted by Virginia Wieringa at Tuesday, April 15, 2008 No comments: 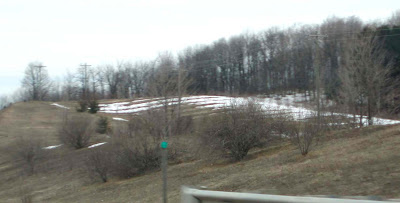 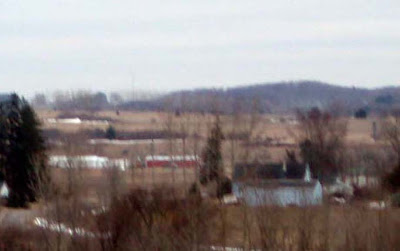 These are photos I took Sunday while driving home from Tosebo on 31 which are driving my work this week. I think this is near Pentwater. It inspires me every time I drive by. I'm inspired by Melanie Parke, Richard Kooyman, and Mary E. Andersen to approach landscape painting in a looser way. I've started some today and will post some when they are presentable.
Posted by Virginia Wieringa at Tuesday, April 01, 2008 No comments:

All images and words appearing in this journal and my website are copyrighted with all rights reserved. ©2020